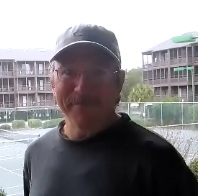 Hey everyone! So, the carpentry season is done for 2012, and now it’s time for some serious buying and selling on eBay for the winter. Kath and I got in on Friday, November 30th and had a little touch-and-go while they tried to figure out why our condo didn’t have internet.

We almost had to move, but fortunately the techs don’t give up easily. It turns out that it was a piece of broken equipment. We have since unpacked and stocked up on some food, and have gone out for some great lunches already (something we don’t get a lot of at home).

I’ve already been to one auction, where I picked up some great stuff that I’m making you guys a video about. Stay tuned! That’ll be within the next week or so…  Some of it has already been sold.

We’ve gone yard-saleing once, this past Saturday, which was pretty good considering it’s just a couple of weeks before Christmas. But, no 18K gold cufflinks! 🙂 Nonetheless, we got a few items. Again, Kath will be filming some videos shortly.

I have to say that it’s good to be back in the land of year-round yard sales. Up north, there’s a bit of withdrawal that comes with Columbus Day weekend. It’s like someone pulls the plug of a huge yard-sale inflatable lawn ornament.

It’s great to be back in South Carolina. Oh – some of you might be wondering why we’re not in Florida like last year. Well, we couldn’t get an affordable place within walking distance of the beach. And here, we could. We not only are across the street from the beach, we also have tennis on site. It’s great.

So I’ll have more for you soon!

Here's some Tips for Selling on eBay - Genre Auctions!